A 100% success rate is a figure that most franchises around the world can only dream of, but an Australian recruitment franchise has maintained the magical figure through 14 years of operation.

A 100% success rate is a figure that most franchises around the world can only dream of, but an Australian recruitment franchise has maintained the magical figure through 14 years of operation.

“Our offices are owned and staffed by local industry specialists, so they can empathise with their clients and job candidates and deal with them on a more personal level,” explained Frontline Recruitment Group founder Debbie Davis.

“They also have the resources and support of a long-standing national operation behind them. Our training and systems are cutting edge and a new agency is able to benefit from the experience of a broader group of professionals. It is the best of both worlds, which helps explain our success.”

Frontline Recruitment Group has also gained industry acclaim, with Frontline Retail agencies in Queensland and Western Australia crowned their states Franchisee of the Year in the Franchise Council of Australia (FCA) MYOB Excellence in Franchising Awards during September. The FCA is the peak body for the $128 billion franchise sector in Australia, making the awards the most prestigious in the national franchise industry.

Debbie Davis initially came from a retail background and held jobs on the floor, in management and in training and development roles.

“Establishing Frontline Retail within our group was a logical choice for me, and we have carefully chosen which industries to align ourselves with. Following on the success of retail, hospitality, health care and construction we are just about to launch mining, legal and finance. We are confident that can extend our proven franchise systems into these markets.”

A key factor in Frontline Recruitment Group’s prolific strike rate is harmony from within the organisation. In a recent survey conducted by leading market researcher 10 Thousand Feet, franchisees from various other franchise systems were asked to fill out a questionnaire to gauge satisfaction with their overall operation. Of the 32 questions answered, Frontline Recruitment Group exceeded the average satisfaction level of their industry competitors in 29 categories including salary, return on agency investment and good work-life balance.

Managing Director Peter Davis and General Manager Doug Downer make up the triumvirate that has driven Frontline Recruitment Group’s flawless expansion nationwide. Peter Davis has been with the group since it began and liaises with key stakeholders, while being responsible for developing the strategic direction of the business and its overseas expansion. Doug Downer has held senior positions working for multinational corporations who specialised in franchising in Australia and is focused on franchise development and agency support.

Peter Davis said the group had long term goals to expand into overseas markets including the USA, UK and China.

“These are long range objectives that we are working towards now. We set our sights on consolidating ourselves in Australia and New Zealand first and we have gone a long ways towards doing that.” 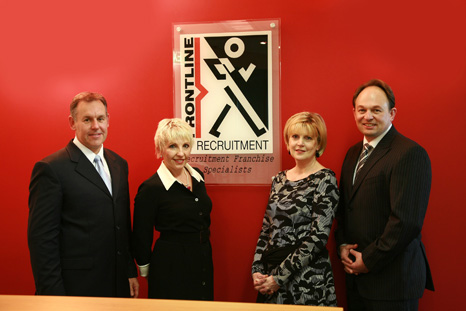